Learning Outcomes: Identify the nutritional adequacy of food pantry boxes and recognize the potential of nutrition profiling to reduce nutrient deficiencies in the elderly.

Caffeine is well known to be the most highly consumed pharmacological agent in the world. Caffeine has been reported to acutely increase blood pressure (BP) and the vasomotor tone for up to 3 hours after ingestion creating a transient hypertension. L-citrulline supplementation given at 6 g/day has been shown to attenuate the increase in brachial and aortic systolic blood pressure (SBP) responses to sympathetic-mediated vasoconstriction induced by cold exposure in healthy males attributed to improved nitric oxide levels, a potent vasodilator. In addition, 7 days of L-citrulline supplementation decreased brachial-ankle pulse wave velocity (baPWV), a marker of systemic arterial stiffness during non-stimulated rest in healthy males. 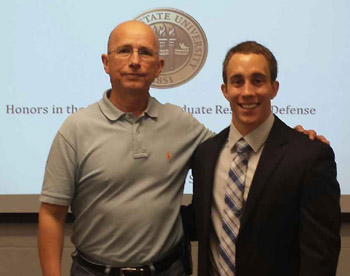 Dr. Arturo Figueroa, MD, PhD and Zach Grunewald
~Florida State University
The purpose of this study was to evaluate peripheral and central blood pressure, arterial stiffness as well as pressure wave reflection responses to acute caffeine ingestion. Moreover, we evaluated the effectiveness of 7 days of L-citrulline supplementation to attenuate these hemodynamics responses to caffeine ingestion. In this double blind, cross-over study design, 19 males (age 22.7 ± 2.7 years, 1.80 ± 0.06 m, 82.8 ± 11.6 kg, and BMI 25.5 ± 3.4 kg/m2) were observed in the supine position before and 60 minutes after the acute ingestion of a 200 mg caffeine tablet or placebo while cardiovascular measurements were assessed. Peripheral BP (brachial and ankle), central (aortic) BP, and PWV of 3 arterial segments (systemic, aortic, and leg) were measured at baseline (before), 30, 45, and 60 minutes after caffeine ingestion. Following 7 days of L-citrulline supplementation (6 g/day) versus placebo, hemodynamics were collected before and after acute caffeine consumption (n=16). Significant increases were observed in brachial SBP (P<0.05), aortic SBP (P<0.01), aortic DBP (P<0.05), ankle SBP (P<0.05), and leg PWV (P<0.05) 30, 45, and 60 minutes after ingestion of a 200 mg caffeine tablet when compared to placebo (P< 0.05) at baseline. The pressor effect of caffeine on hemodynamics was more pronounced on central aortic BP than brachial BP. L-citrulline supplementation did not affect hemodynamics or pressor effects induced by acute caffeine consumption. This study shows that 200 mg of caffeine exerts a significant effect on leg arterial vasomotor tone (arterial stiffness) in young healthy male subjects. A novel finding of the present study is that the acute effect of caffeine on aortic BP is attributed to peripheral arterial stiffness without affecting the aorta as demonstrated by a marked increase in leg PWV with no concomitant increase in aortic PWV.

Information regarding future applications for this award are available at kon.org/urjhs