Nutritional Profiling Systems: Can They Be Implemented in Subsidiary Food Pantries for Reducing Nutrient Deficiencies Among the Elderly?
~Rebecca L. Walker

Learning Outcomes: Identify the nutritional adequacy of food pantry boxes and recognize the potential of nutrition profiling to reduce nutrient deficiencies in the elderly.

Background: The elderly food pantry client (> 60 years old) has increased risk for nutrient-related deficiencies due to a reduced intake of macronutrients, Iron, Calcium, and Vitamins A and C.

Methods: This mixed method design examined the presence of nutritional profiling systems in the United States Department of Agriculture’s Commodity Supplemental Food Program (CSFP), two regional food banks, and three subsidiary food pantries through six interviews and a 10-question survey with each facility director. The pantries were selected for their designation as a full or partially client-choice food pantry. Additionally, a nutritional analysis of a sample of 10 boxes from each pantry and 1 box from the CSFP (total n=31) was completed using MyPlate Supertracker. 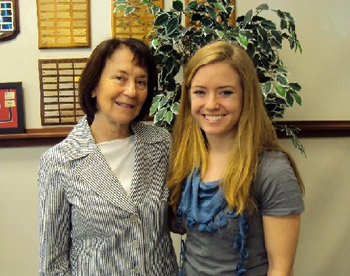 Conclusion: These findings indicate that nutrition profiling is not currently utilized, but pantries are interested in utilizing a system if provided by food banks. Because this study was exploratory, results cannot be generalized without further research.

Information regarding future applications for this award are available at kon.org/urjhs