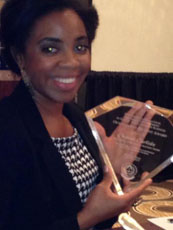 Chanal Carlisle
Obesity is affecting children all over the world; it is increasingly recognized as a major public health epidemic. There have been more and more cases of non-communicable chronic diseases occurring at younger ages due to increased weight in children. Researchers are constantly trying to find ways to fight this problem by determining what is most effective. Numerous studies suggest that the incidences of key non-communicable chronic diseases are heavily associated with lifestyle and physical activity. The problem was examined in this study by surveying parents in the community of a historically black university located on the eastern Shore of Maryland. The survey was created to measure the parents’ willingness to accept nutrition education and their interest in commitment to making healthy lifestyle changes for their families. From the survey, the parents were able to develop solutions tailored to the needs of their children.

Sodium is needed in small amounts in our diets for healthy bodily functions; however, too much salt consumption can put a person at risk for complications such as hypertension, a disorder that is adversely affecting the health of many people around the world. Jamaican people have a high prevalence of hypertension; therefore this study looked to see if a difference existed in the quality characteristics of color, drip loss, and tenderness of a cooked chicken breast when the sodium content was reduced in the marinate of one of the country’s favorite dishes, Jamaican Jerk Chicken. One traditional style marinade and one lower sodium marinade were prepared and two whole chicken breasts were allowed to marinate overnight before they were cooked. A random, convenience sample of untrained judges completed a duo-trio test to see if the judges could detect a difference between the traditional and experimental Jerk Chicken formulation. Objective measures performed looked at the effect of a lower sodium marinade on the color, drip loss, and tenderness of a chicken breast to see if differences existed in these areas between the two recipes. The findings indicated that there was a slight difference in color, drip losses, and tenderness when lower sodium content was used in the recipe for Jamaican Jerk Chicken marinade.

The 1994 Rwanda Genocide left a devastating impact in the nation’s psyche. Among the egregious acts of violence committed during the 100 days of terror, it is estimated that there were over 250,000 victims of sexual assault. This paper evaluates past and current research and interventions on sexual violence survivors of the Rwanda Genocide to identify the limitations in the research. Critique is only a stepping ground. Furthermore, this paper proposes ways to expand and redefine the complex mental health needs of survivors of sexual assault during the Rwanda Genocide to address the collective trauma at familial, intergenerational, community, and national levels.